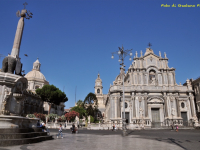 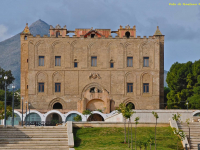 From April 4st to October 28th departures every Tuesday

Independent arrival at the hotel in the charming city of Palermo (optional private transfer on request). Meet with our tour-leader; dinner and overnight in hotel.

Proceeding on we will reach Piazza Armerina where we will admire the splendid polychrome mosaics of the famous Villa Romana del Casale, World Heritage Site. The complex, which has some of the most extensive and most beautiful Roman mosaics known, is a World Heritage Site. This majestic villa, belonged to a member of the Roman Senatorial aristocracy, hosts prestigious mosaics representing mythological and historical episodes and scenes of hunting and entertainments! After free time for lunch, departure to Ragusa Ibla and visit of its historical centre, cradle of Sicilian baroque, with its Cathedral situated in the beautiful square and the “giardino Ibleo”. Used as a location of the extremely popular Police Inspector Montalbano Tv series, it is today stated among the 44 Italian World Heritage Sites. This little precious ancient city, well known thanks to the Commissario Montalbano television series, hosts more than 50 churches and many baroque architectural treasures. We’ll conclude the visiting day with a tasting of local products. Proceed to Catania for dinner and overnight stay in hotel.

On request, it is possible to arrange optional HD private excursions to Acireale or Caltagirone